God of Conversion: Hope in a Prodigal World

The first time I visited a Manila shantytown I was twenty six, despite having grown up in the Philippines. Manila to me was an endless expanse of uptown malls, hotels and amusement parks. I rarely entered the old city of Manila, and the riverside sprawls were alien to my senses. I was not shocked when I finally arrived in the barrio; seven years in England had informed me about what my country was meant to look like from BBC reports of grinding poverty and governmental abuse.  My friends used to ask me how I could stand growing up well off surrounded by so many poor people. Of course, the thing was that I rarely saw any of it. Walls can hide many unsightly truths. Furthermore, the system that allows for the huge differences in wealth within the Philippines is the same one that causes the discrepancy between developed and developing countries. An analysis of this global system of poverty has been extensively commented on by the liberation theologians, economists, sociologists, but none is more powerful a description than Alan Paton's Cry, the Beloved Country.

God of Righteousness: How Good People Affect Us

My brother complains that I cannot like a book unless a panel of experts say it is any good. In truth, I do tend to choose the books I read according to prize-winning status. I search through printed lists from the Pulitzer, Booker, Orange, and Costa, hunting for these titles amongst the endangered shelves of local libraries. I salivate when a new shortlist comes out. Unlike the Pavlovian dog, however, my salivation has not been strengthened by regular reinforcement. I tend to find these prize-winning novels to po-mo for their own good. Occasionally though (as with last year's Booker winning The Sense of Ending by Julian Barnes), I come across something really rewarding, and none has better conditioned me than Marilynne Robinson's Gilead. 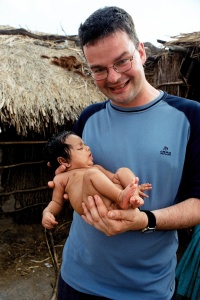 I just wanted to bring your attention to my friend Tim's blog which is about his experiences of the Philippines and India during tertianship and post-tertianship. I have one guest entry in it too. Tim offers a lot of insight, especially about education and social justice in Asia. Have a gander.

Also, for all you Dutch readers out there, our very own Samuel is now writing a blog by the young Jesuits of the Dutch and Flemish provinces. Can't say for certain what it is really about, but  if it's written by my friends Samuel, Walter and Bart, it will be geweldig.

Email ThisBlogThis!Share to TwitterShare to FacebookShare to Pinterest
Labels: jesuits

Yes, I know many of these are groan-worthy, but still …

Why did the Jesuit cross the road?

For the greater glory of God.

Why was the Jesuit simply staring at the liquor cabinet?

He was discerning his spirits.

How many Jesuits does it take to change a light bulb?

Just one – but 12 will volunteer anyway and enter a heated argument about whether the bulb needs to be changed, which model to go for and whether a new bulb is compatible with our way of proceeding. Eventually, the superior simply makes a decision.

Why do Jesuits love Santa Claus?

Because Santa brings his gifts from above (de arriba).

Why did the Jesuit school award diplomas to four wolves on graduation day?

Because its objective was to form men and women, four others.

What do you get from a Jesuit psychologist?

An examination of consciousness.

Why is a Jesuit’s computer the safest place to back up your data?

Because he is more ready to save his neighbour’s proposition than to condemn it.

Why are there so few Jesuit theoretical physicists?

Because they have to go on experiment when they join.

Why does the Society of Jesus have to change its name in England?

Because Margaret Thatcher said, ‘there is no such thing as society’.

Because Jesuits need to have a long formation.

If you can think of any others, leave them in the comboxes.

Ever notice how science fiction writers who want to portray a religious figure in space tend to pick Jesuits? The most famous instance is Mary Doria Russell’s The Sparrow; but others include James Blish’s A Case of Conscience and Arthur C. Clarke’s The Star.

My first encounter with Jesuits in space was Dan Simmons’s Hyperion. Fr. Paul Duré SJ (though the abbreviation does not appear in the book), a follower of Teilhard de Chardin SJ (historical Jesuit), sets up an ethnological research station on the planet Hyperion when he encounters an alien race called the Bikura. I won’t give too much away, but the Bikura challenge Fr. Duré’s faith in a way you won’t be expecting!

Back to real life, I will be travelling tomorrow with a group of students from the Jesuit college in Limerick to the rocket range in Andøya, Norway as the Irish contingent for Cansat, a European Space Agency competition. The aim of the competition is to design and build a fully functional satellite prototype that fits inside a Coke can. The Cansats will be launched up to a height of 1km, and teams will be judged on technical merit and presentation skills.

Check out the students’ blog here.

Way of the Cross: Concluding Reflection

Dear friends,
We have walked again, with Jesus, the Way of the Cross. We have learned to see again the world, as He sees it, to love it as He loves it. As you return, I would like to leave you with three questions from the Spiritual Exercises of St. Ignatius of Loyola:

All: Glory be …
In the name of the Father, and of the Son, and of the Holy Spirit.
R. Amen.
Find all the stations here.

A bird - seen a hundred times before - becomes a blaze of fire, a revelation of something mysterious. With Catching Fire we hope to shift our gaze to the deeper reality which underlies our everyday life. It is this deeper reality that gives Jesuits like us life and enthusiasm to be of service to all. We hope this enthusiasm is contagious and that the fire that sets us alight may do the same for you.
Follow us on Twitter at @firecatching!